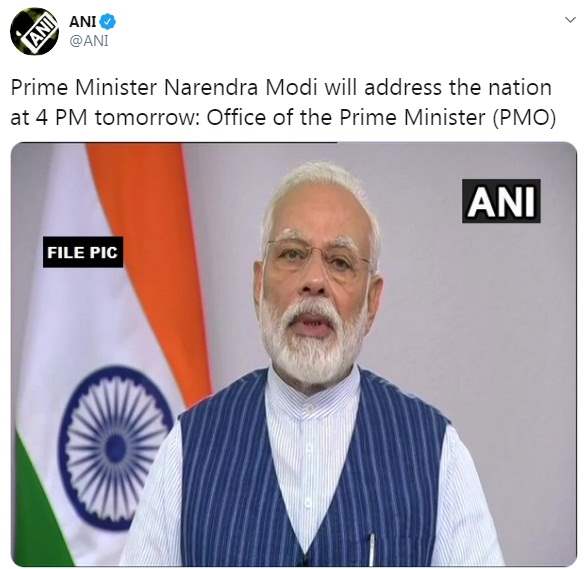 PM Modi will address the country at 4 pm tomorrow, can give a big message to China

Home » Blog » PM Modi will address the country at 4 pm tomorrow, can give a big message to China

PM Modi will address the country at 4 pm tomorrow, can give a big message to China

New Delhi: On the one hand, there is an India-China deadlock over LAC in eastern Ladakh. At the same time, the country is also fighting with Corona. Meanwhile, Prime Minister Narendra Modi will address the country at 4 pm tomorrow. According to sources, in this address he can give a big message to China. It is noteworthy that on the midnight of 15/16 June there was a violent skirmish between the soldiers of India and China, in which 20 Indian soldiers were martyred, after which there is a constant standoff between India and China. However negotiations continue at the diplomatic level and at the military level.

Explain  that on the ongoing deadlock on the Line of Actual Control (LAC) in the Galvan Valley with China, Prime Minister Narendra Modi on Sunday said in his mind that India knows to play friendship but if one looks at its land, it is appropriate He also knows how to answer. In the 13th episode of the monthly radio program ‘Mann Ki Baat 2.0’ on AIR, the Prime Minister, remembering the Indian sons who were martyred in the Galvan Valley, assured the nation that their sacrifice would not go in vain.

India knows how to answer
PM Modi said that the world has seen India’s commitment to protect its borders and sovereignty. India knows to befriend, but on the land of India, it also knows to raise its eyes and look with the eyes and give appropriate answers.

Mother Bharti will not let the heat burn
Modi said that our brave soldiers showed that they will never let the glory of Mother Bharati come to light. The entire nation is bowing down the valor of all our soldiers who died in Ladakh. The whole country is grateful to him. The whole country is bowing before him. Every Indian is also experiencing the pain of losing them.