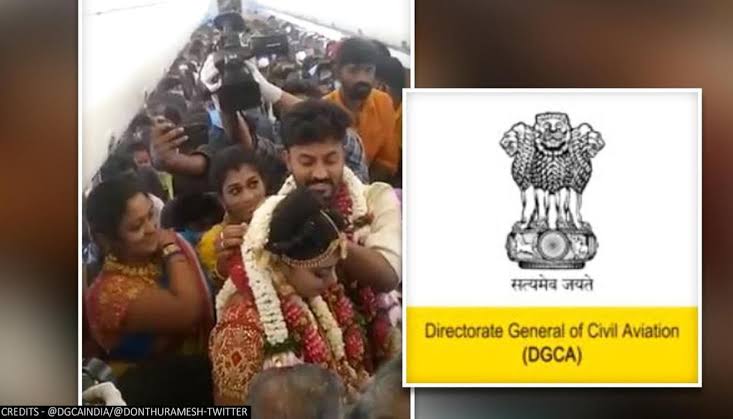 New Delhi: SpiceJet has derostered the crew after a video of a mid-air wedding, in the presence of guests and relatives, inside a chartered flight wherein went viral on social media. The airline has also been directed to lodge a complaint against those who did not follow the COVID-19 rules.

The chartered flight left the Madurai airport and remained airborne for approximately two hours on Sunday morning before returning there. All the passengers had reportedly submitted their COVID negative RT-PCR report before boarding the flight to attend the mid-air wedding, media reports said.

SpiceJet has also issued a statement regarding the controversy the client, who had booked the flight, was briefed on the COVID guidelines and “denied permission for any mid-air activity”.

“A SpiceJet Boeing 737 was chartered by a travel agent in Madurai on May 23, 2021, for a group of passengers for a joy ride post their wedding. The client was clearly briefed on Covid guidelines to be followed and denied permission for any activity to be performed on board,” SpiceJet said.

The airline said that the approval for this flight was taken as a “joy ride for the wedding group”.

“The agent and the guest passengers were briefed in detail, both in writing as well as verbally, on social distancing and safety norms to be followed as per Covid guidelines both at the airport and on board the aircraft throughout the journey.”

SpiceJet further said the passengers did not follow the guidelines despite repeated requests and reminders by the crew. “The group was repeatedly briefed on the safety norms to be followed by the operating cabin crew and advised to follow the protocols laid down by DGCA including restrictions on photography and videography. Despite repeated requests and reminders, the passengers did not follow Covid guidelines.”