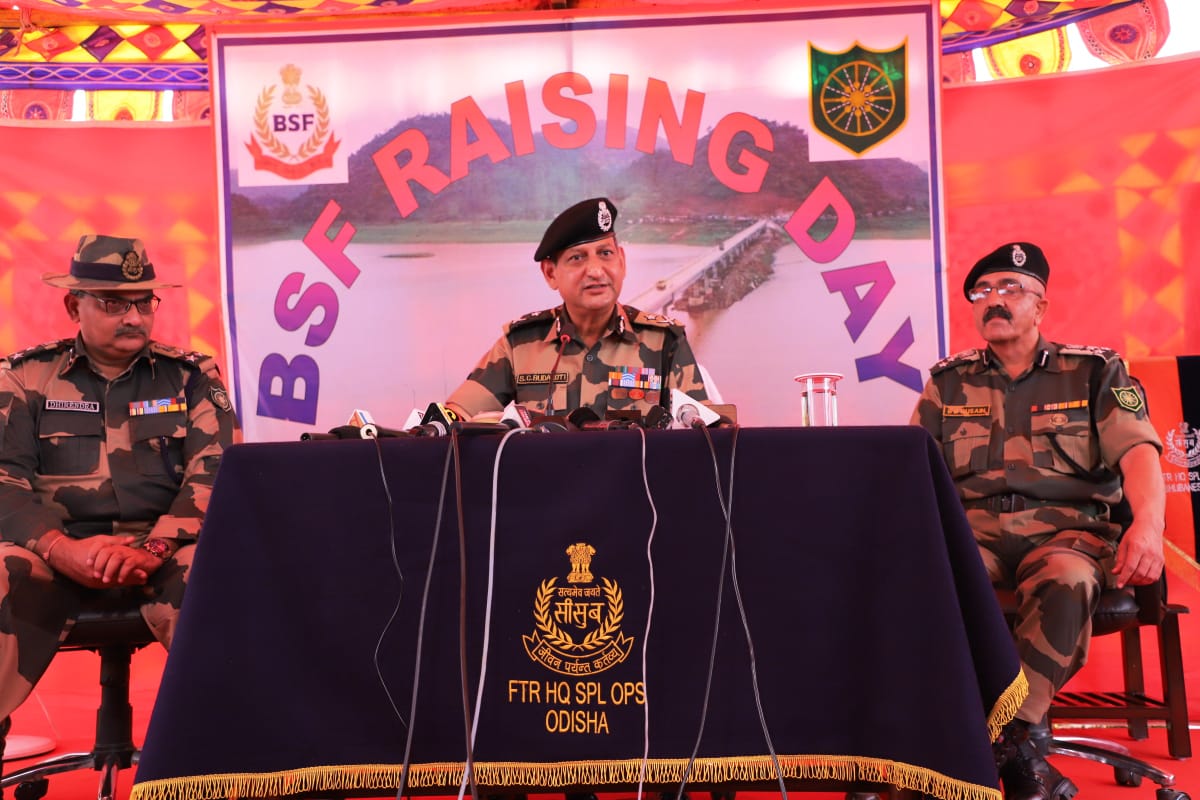 Bhubaneswar: The Border Security Force is a major Central Armed Police Force of India and the world’s largest Border guarding force, which was raised on 1 December 1965.

The responsibility of the force is to keep a constant vigil on India’s International Borders, protect India’s land Border and prevent trans-border crime. Initially, it was raised with only 25 Battalions and exponentially grown to 193 Battalions. BSF guards India’s approximately 6,385 km long International Border which passes through rivers valleys, inaccessible deserts and snow-clad mountains. The BSF has been entrusted with the responsibility of preventing Trans Border crimes like smuggling/infiltration and other illegal activities and instil a sense of security in the minds of the people living in the border areas. Earlier, security was provided by the State Armed Police Force on the Borders of India. On 09 April 1965, Indian Border posts were attacked by the Pakistan Army in the area of ​​Kutch in Gujarat. Due to which the Government of India decided to establish a separate force specially armed and trained to guard the borders with Pakistan, with Shri K F Rustomji as its head. He formed the world’s largest Border guarding force on 1st December 1965 with its motto “Jeevan Parayant Kartavya”.
Today BSF completes 56 years of its existence as “Indias first line of defence”. Border Security Force is performing its duty round the clock on Indo-Pak and Indo-Bangladesh Border. Simultaneously, it is also carrying out Counter Insurgency Operations (CI – Ops) in the north eastern states and J&K. Apart from this, BSF has shown its valour at every step by fulfilling every responsibility given by the Government of India, be it natural calamities, Naxal problem, Election duties etc.

The Naxalite movement in Odisha began in the 1960s as a peasant movement. This movement later turned violent. In the beginning of this century, this movement became fierce at many places Naxals were running parallel government.
In 2004 Police Armoury was looted in Koraput, in-charge of Motu police Post was killed in board day light in 2006, blasting of train engine in Darliput in 2007 and office of Station Master was burnt in 2008, attack on Nayagarh Police Training School in which 14 police personnel were martyred, in 2008, 38 commandos / police personnel of Greyhound were killed by the Naxalites. In 2009, 11 CISF Jawans were killed by Naxals in NALCO at Damanjodi. Due to the frequent occurrence of many such incidents, BSF was inducted with 05 Battalions in the state of Odisha in 2010.
The mandate of BSF is:-
To assist the state Police in conduct of Anti Naxal Operations.
To create a Sense of Security amongst the local populations.
To facilitate developmental activities.
Initially BSF was deployed in the four southern most districts which were most affected by Maoists ie Malkangiri, Koraput, Rayagada and Nabarangpur.
02 Sector Headquarters with 08 Bns are deployed under this frontier, in which 04 Bns each are deployed under the Sector headquarter Koraput and Malkangiri to prevent Naxal activities. Frontier Headquarter (Special Operations) Odisha geographically spans across the states of Odisha, Karnataka and Kerala.

BSF is assisting the state Government in developmental works in the vulnerable and highly Naxal affected areas of Koraput and Malkangiri districts i.e. Road and Bridge construction works, Mining projects, hydroelectric power plants and communication Towers. Developmental works have increased manifold after the deployment of Border Security Force in District Koraput and Malkangiri. The details of which are given below:-
New School – 101
Hospital – 30
Anganwadi – 239
Panchayat Bhawan – 12
Community Hall – 33
Small Bridges and Culvert – 72
Road Construction work – 105
The significant achievement of the Border Security Force in the state of Orissa cannot be complete without mentioning the Gurupriya Bridge. In July 2018, Hon’ble Chief Minister Shri Naveen Patnaik inaugurated the Gurupriya Bridge and renamed the Cut Off area as “Swabhiman Anchal”. Due to the construction of this bridge, the population of 30 thousand of 151 villages has been connected with the main land of the state. This project was conceptualised in 1982 and could only be completed due to security provided by BSF.
Many Jawans and officers of Border Security Force have sacrificed their lives for the nation in fight against Naxals.
The achievements of the Border Security Force in the districts of deployment are as follows: –

Total 63 dreaded Naxals were killed, out of which 09 Naxals were killed in 2021.
A total of 790 Naxals were apprehended, out of which 06 Naxals were apprehended in the year 2021.
A total of 629 hardcore Naxals surrendered, out of which 08 Naxals surrendered in 2021.
A total of 387 IEDs (live bombs) were recovered out of which 19 IEDs were recovered in 2021.
In the year 2014 and 2019, during the Orissa assembly elections and the Lok Sabha elections, the Border Security Force has succeeded in conducting peaceful polling in the vulnerable Naxal affected areas.
Provided necessary commodities to the poor and school children in remote villages of Koraput and Malkangiri districts, provided necessary medical facilities to the villagers, provided employment training to unemployed youth under skill development programme, under tribal youth programme Border Security Force is facilitating tribals in providing exposure to culture and heritage of India.
Apart from this, during COVID pandemic, provided ration, medicines and daily use items to the needy families in Naxal affected villages and also helped stranded local laborers.