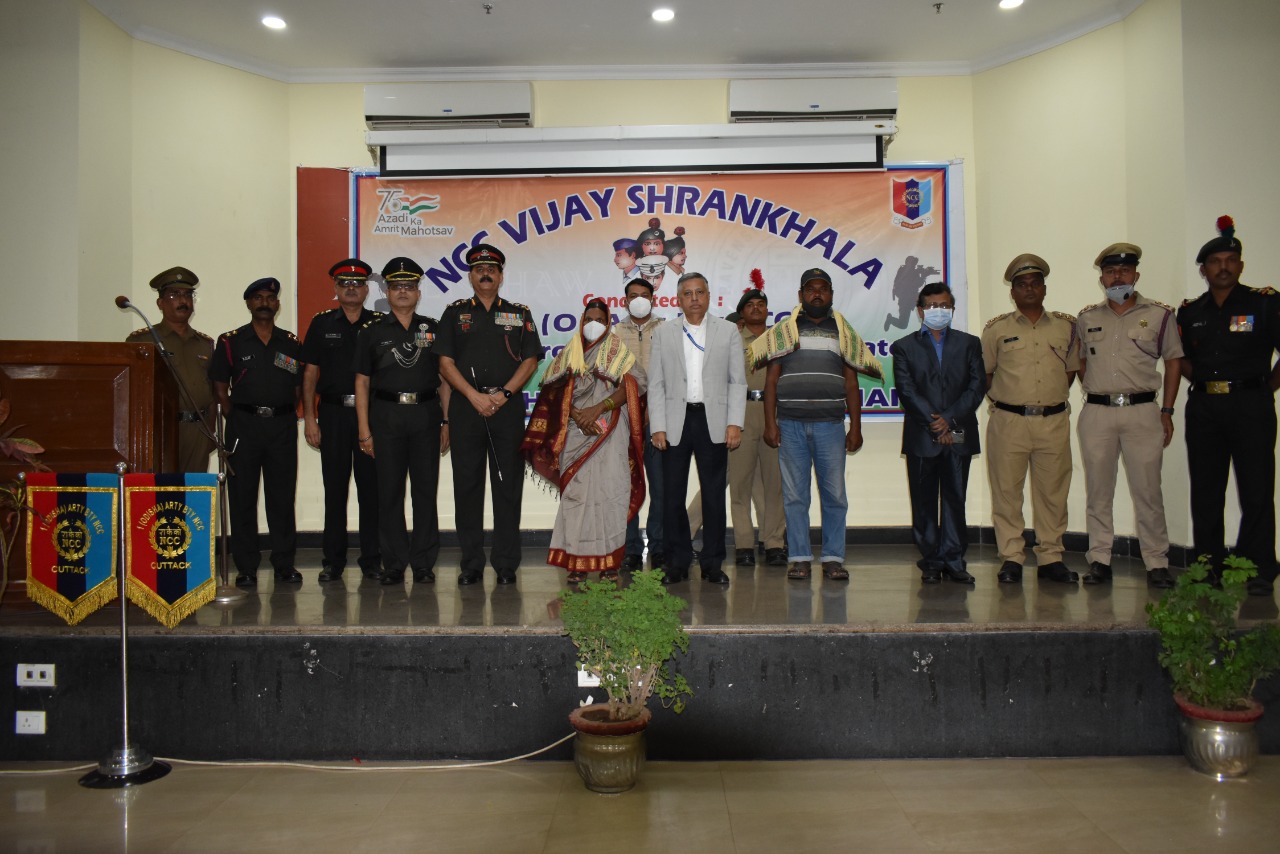 NCC is celebrating 75 Years of Independence as ‘ AZADI KA AMRIT MAHOTSAV in Cuttack.

By The Odisha BazaarDecember 5, 2021No Comments Cuttack: National Cadet Corps (NCC) is celebrating 75 Years of Independence as ‘ AZADI KA AMRIT MAHOTSAV’ and that also coincided with 50 th Anniversary of India’s victory over Pakistan, which changed the political map of the world with creation of Bangladesh.

To pay respectful homage to the 1971 War Heroes, at pan India level NCC is felicitating our Martyr’s Next of Kins (NoKs) at 75 different places termed as ‘VIJAY SHRINKHALA’ including Cuttack.

A grand felicitation ceremony was organized at Ravenshaw University by NCC Cuttack Group on 05 Dec 2021. Smt Rebati Rout , w/o Saheed Naib Subedar Gopa Bandhu Rout and Shri Pazi Naik, s/o Saheed Sepoy Bhaskar Naik of 6 BIHAR REGIMENT who had made supreme sacrifice for the Nation in 1971 Indo-Pak war were felicitated by NCC.

Officer Commanding, Lieutenant Colonel S P Otta extended warm welcome to all the guests and dignitaries present on the occasion on behalf of Colonel Rajinish Kapoor, Group Commander of NCC. Prof. (Dr.) S K Nayak, Vice Chancellor of Ravenshaw University addressed the function as Chief Guest and while paying respect for the Saheed and their families called upon the cadets and future citizens to get inspiration from the sacrifices made to upholding National dignity. Additional District Magistrate Shri Shri Bijay Kumar Khandayatray of Cuttack District Administration felicitated the family members of martyrs as Guest of Honour, while remembering the rich heritage of Indian Armed Forces and also their displayed velour in various operations. Group Commander of Cuttack Group NCC extended hearty thanks to the family members of the martyrs and other distinguished guests for their valuable presence and such inspiring thoughts for NCC cadets.