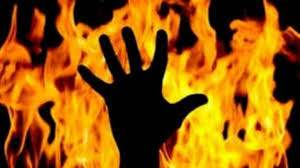 By The Odisha BazaarFebruary 4, 2020No Comments

Kendrapada/ Cuttack: A 21-year-old woman was set on fire allegedly by her in-laws after failing to get dowry in Odisha’s Kendrapara district, and three of the five accused were arrested on Monday, police said.

The five allegedly tied the woman to a cot and set her on fire after sprinkling kerosene on her. She was rescued by the neighbours and is now battling for life at the SCB Medical College and Hospital in Cuttack with 60 per cent burns.

The woman’s husband is currently employed as a plumber in Oman and was not involved in the crime, police said.

Her parents-in-law and sister-in-law were at large since the incident on Saturday and they were arrested on Monday.

Two other accused – her another sister-in-law and her husband – are absconding.

Quoting from the complaint filed in this regard, a police official said the woman was tortured for dowry by her in-laws since her marriage in June 2018.