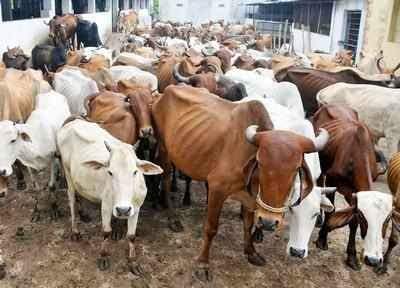 Cuttack:Nani Bai Myaro program will be organized in a grand manner to look after the elderly, the handicapped, the sick, the Gaumata. Under this program, Nani Bai Myro program is being organized with the goal of raising three crore rupees for the service of the elderly, crippled sick Gaumata living in the Nandgaon Vriddhi Gau Seva Ashram as well as for the Gau khadha(cow food) Income Center. The event, including the dance drama of Nanibai Row Myaro, will show infinite grace to the childlike Radha Swaroopa Poojya Jaya Kishoriji’s Shree Mukhmayi, Moksha Pradayini Gaumata. It is being organized on behalf of Nand Village Vriddhi Seva Ashram, Mangrajpur Chowdwar, Cuttack on 13,14 and 15 March 2020 at Marwari Club, Manik Ghosh Bazaar, Cuttack. A presentation meeting was held on Sunday at 11.30 am, under the chairmanship of Nandgaon Gaushala chairman Kishanlal Bhartia, at the “Textile Merchant Association Hall” Jubilee Tower, Chaudhary Bazar.

In this meeting, the president of the organization, Kamal Sikaria, welcomed all the cowherds and conducted the meeting. Nathmal Chanani, former president and chairman of Nandgaon Gaushala, addressed all the devotees with great enthusiasm, urging them to come forward and go to the service in this program.
He said that under the Nani Bai Myaro program, a target has been set to raise three crores for the Nandgaon Gaushala Gaukhadya Income Center, which was strongly supported by all and some of the cowherds went on to write their help money in this episode. Chanani further said that Gauseva is the greatest service. If we all work together then no work is impossible. There is no shame in asking for Gau seva. Gaumata’s grace is full. Also, he said that due to the formation of Go Food Income Center, the rent of four lakhs of the month will be developed, Nandgaon Gaushala will be developed. Gaushala chairman Vijay Khandelwal gave an example, highlighting the importance of charity and said that there is never any shortage by giving donations and one should always keep donating for good works with his earnings in life. He showed his participation to the hilt and assured to donate five lakh rupees to the Go Khadi Income Center and he was chosen as the Chief Judge for Nani Bai Myaro.
Secretary Padam Bhavsinghka kept the entire information of the programs to be held before the House and kept the list of the team made earlier.
Suresh Kamani, President of Utkal Regional Marwari Conference welcomed a scheme like Eat Rs 11.
While addressing the gathering, social activist Vinod Tibdewal said that there was a time when national-minded and national officials used to go ahead in Goseva and Gujarati, Marwari Gaumata used to be increased, but these days the number of 50 crore Gaumata is less Has become a matter of concern. This has affected the environment and he said that Godhan is the best wealth.
Convenor of Nani Bai Myro’s program Devkinandan Joshi called for maximum number of people to join this program. At the end of the program, the vote of thanks was given by Purushottam Agarwal. In this meeting, mainly Kamal Sikaria, Gopal Bansal, Padam Bhavsinhka, Nathamal Chanani, Vijay Khandelwal, Kishanlal Bhartia, Devkinandan Joshi, Ramkaran Agarwal, Sunil Murarka, Manoj Singhi, Hemant Agarwal, Pawan Gupta, assuring their full support Announced to give his own support money.