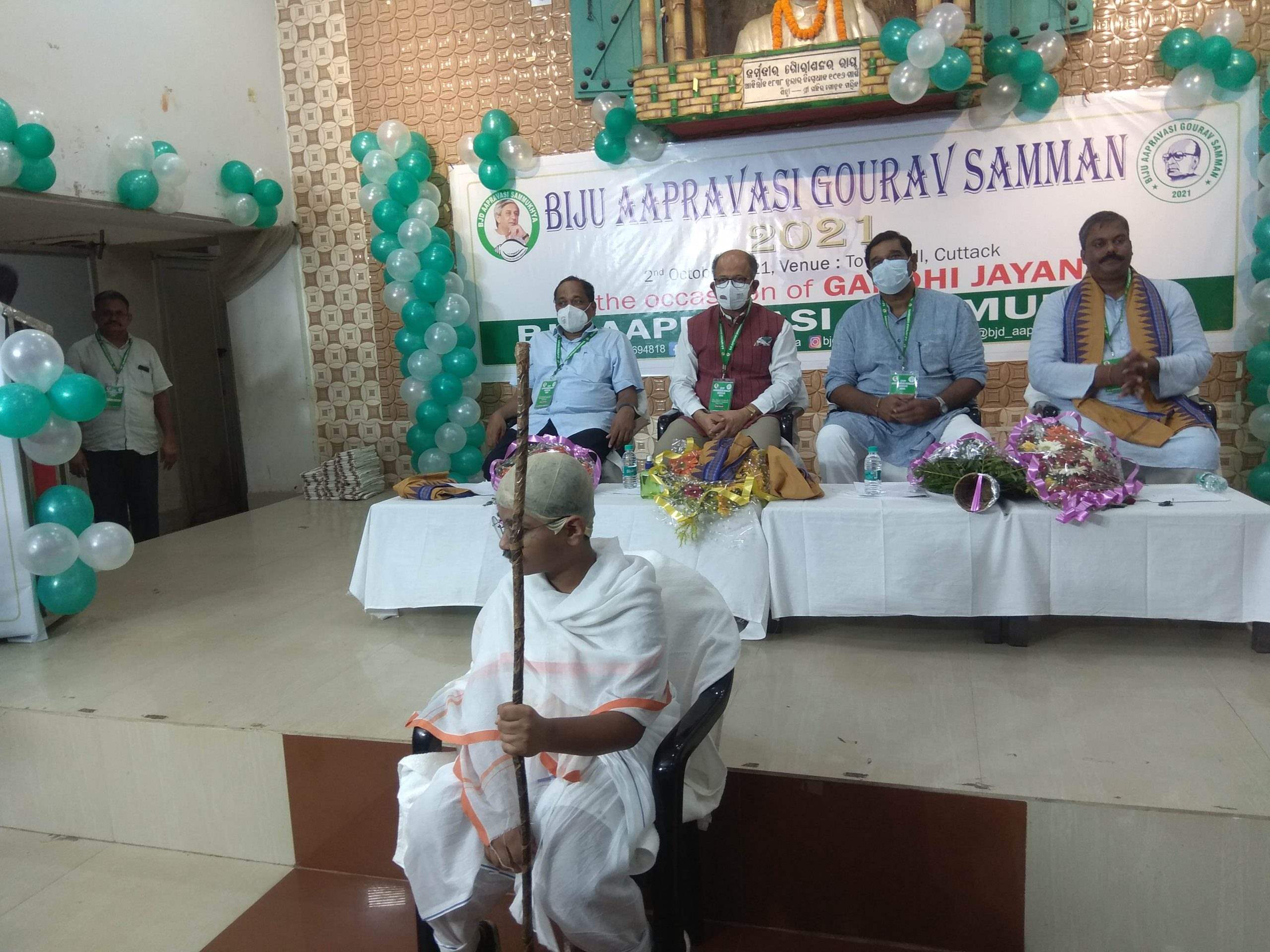 Cuttack: BJD Aapravasi Sammukhya has observed Gandhi Jayanti at Town Hall cuttack on 02.10.2021 by felicitating the organizations & individuals of Aapravasi Samaj who have contributed in the field of “Social Service & Community Building” They were Felicitated by “ Biju Aapravasi Gourav Samman-2021” for their continuous efforts to bring the positive impact in life of needy people. The event was started by garlanding the photograph of Father of the Nation Mahatma Gandhi, Prabad Purush Biju Patnaik & Deep Prajwalan along with the Prathana Sabha (Ram Dhun) & taking of pledge to work on the principles of Mahatma Gandhi especially the Non Violence, Peace & Harmony as 2nd Oct. is also celebrated as the International Non Violence Day.

The Welcome Speech was given by the State Convener of BJD Aapravasi Sammukhya Nandlal Singh. He Said that Aapravasi Samaj is always ready to serve the people of Odisha in any Contingency or Calamity on the principles of Mahatma Gandhi.

He added that we all will work hand in hand to achieve the dreams of Prabada Purusha Biju Babu and Hon’ble Chief minister of Odisha Shri Naveen Patnaik who is also the No.1 CM of our Country. He said that today’s Gourav Samman event is organized to celebrate the continuous work of social service by different organizations of Aapravasi Samaj.

Chief Guest of the event Shri Amar Patnaik said that Hon’ble Chief Minister Of Odisha Shri Naveen Patnaik is working for the development of every single person and community of our state and on the same line the formation of BJD Aapravasi Sammukhya was done.

He praised the efforts of Aapravasi Sammukhya & it’s  state convener Nandlal singh for working tirelessly to associate the people of Aapravasi Samaj with the party as well as the pro people initiative of the Odisha Govt. Further he said we all together can be helping hand to naveen ji for the development of odisha. Guest of Honour & BJD District President, Cuttack Shri Debasish Samantray also praised the efforts of Aapravasi Samaj & the state Convener of BJD Aapravasi Sammukhya. He said in cuttack we leave together and no one is Aapravasi all are Pravasi.